“Mint is so crucial to my personal finance I honestly have no idea where I would be without it.” That’s what Austin, TX photography consultant Lawrence Peart says when reflecting about his transition from college student to young pro, financially speaking. His experience so far shows that it is possible to graduate from college without debt, and to adjust to the higher cost of living as a young professional, while also saving money for your future.

But Peart stands out from the crowd. We looked at Minters’ numbers to see how college students and recent graduates use their money or handle debt, and found that there’s a big shift in many categories from ages 18 to 25 – incomes increase, spending categories fluctuate, and debt repayment – well, you know how that goes. Student loan payback time for many!

Depending on the field that graduates enter, incomes can be across the board, but a majority of our Mint users in that age range earn between $25K and $50K annually. 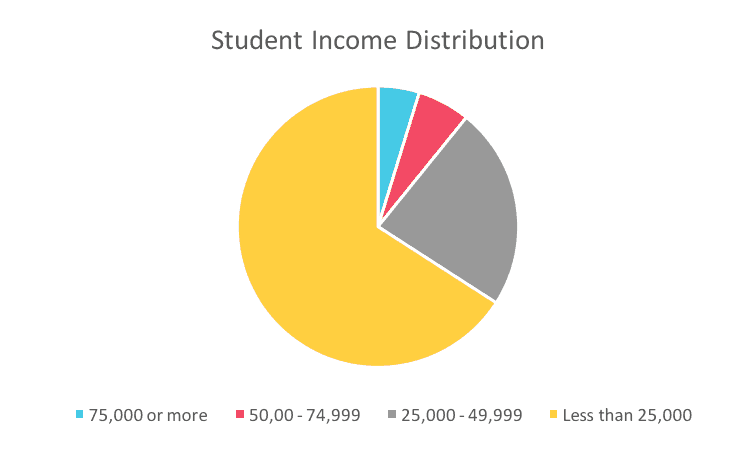 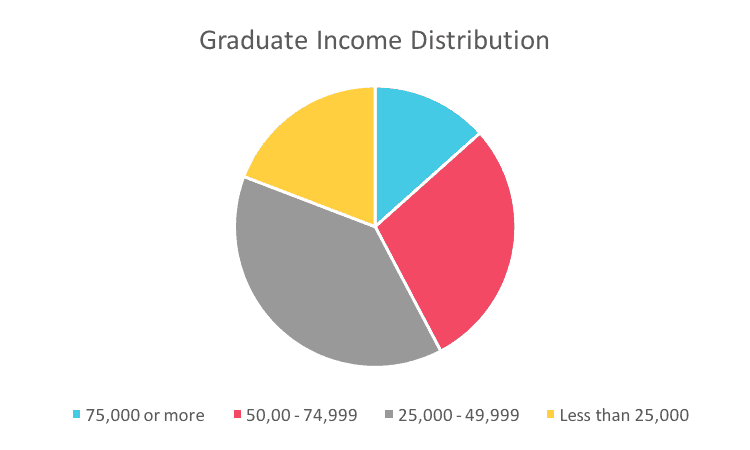 The newfound earnings may seem like a lot of money to a recent grad but, when faced with the sticker shock of life outside school, the typical Mint user experiences an accompanying increase in spending on rent, entertainment, and education related expenses – mostly student loan repayment. That bill averages about $300 per month.

Most grads continue to use credit cards after graduation. In fact, their card charges increase from $1,200 to $1,900 on average. But most of them don’t pay finance charges, which means these savvy Mint users are the ones who pay their balances by the end of the month. This explains why Mint’s young users have an average credit score of 690, considerably higher than the national average of 630 for the same age group*.

Good work, Minters! But while you’re paying off your college debt and adjusting to life on the outside, don’t forget to save for your future. Only 2% of college students have significant long-term savings, and that number only goes up to 7% among college graduates 25 and under. It might seem daunting to set aside those crucial dollars, but that money will grow over time and make your older self thank your younger self.

Peart is in that 7% – he follows the mantra “Save, invest early and often, reap the benefits later.” With a goal to live debt-free and retire in his 20’s (he just turned 26), Lawrence uses Mint to budget and find extra money to sock away for the future. While his income falls in the same range as the majority of recently graduated Mint users, his experience both during school and in the few years since graduation defies many of the statistics, so naturally we asked him all about it.

What kind of shift in spending did you experience between college and post-college life?

I think it might surprise most people to hear that I spend far less money now than I did in college. Once you start earning an actual income and developing a clearer sense of your relationship to money it becomes much easier to save, and feels more rewarding to do so. While in school I never had much cash, so in a way it had less value and I spent it more freely. You expect to be broke in college, which becomes a self-fulfilling prophecy, and unless you’re careful that can then extend past your college years into your working life. I even had a little saying for it: the closer I am to zero, the less I have to lose.

The average college graduate spends about $300 per month on student loan repayment. What’s your bill?

$0. My experience paying for college was a mixture of some good fortune, a little bit of privilege, and tons of hard work. I chose a public school in a reasonably cheap city, I received decent grants, I applied for every scholarship available to me every semester (and made sure I had the grades to qualify) and for all but my sophomore year I worked at least part-time to have a source of income. I graduated broke, sure, and maybe missed out on some fun things here and there, but at least I didn’t owe anything. 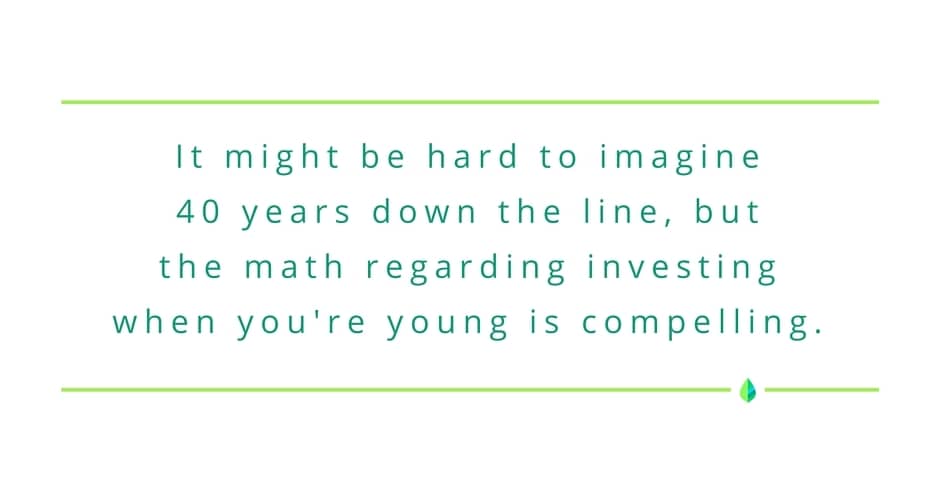 What was the most shocking financial realization you experienced once you left college?

That you can save quite a bit of money not doing the stuff everyone seems to think you have to be doing. If you don’t buy fancy clothes, go out for drinks every day, feel the need to keep up with the newest phone every 6 months etc., all of that extra cash starts to add up.

What are your thoughts about retirement savings, and what do you practice?

I half-seriously tell myself that I want to retire in my 20’s. I don’t mean “retire” in the way most people would think of retirement, I always want to be creating and applying myself to something, but I’d like to have the ability to not work for long periods of time. To be able to wake up one day in the near future and say “I am comfortable not working the rest of the month, time do something creative” and not feel guilty about it. That’s the goal.

I set up a Roth IRA almost immediately upon getting sustained income and contribute the full amount each year into basic low-cost index funds. I admire my parents in a lot of ways and don’t question their decisions and what life events influenced them, but while they are both doing fine in retirement age they are doing so without any long-term retirement account holdings. It might be hard to imagine 40 years down the line, but the math regarding investing when you’re young is compelling.

How does Mint help you stay on track?

I worked for about nine months before I came across Mint, and even though I thought I was being good with my money, you truly have no idea until you see it categorized and laid out in front of you. Those little purchases each day, the subscriptions, the monthly payments, it all adds up fast. You might think you’re saving money, but you’re not. It really does take hard work. Mint makes it easy, and I’ll tell everyone who listens: it’s even made paying bills fun. The first week of each new month is like Christmas. I get paid, I pay off my recurring expenses and then allocate how much I want to save that month before organizing more flexible costs like groceries, entertainment, etc. I follow one maxim above all else: you don’t save what is left after spending, you spend what is left after saving.

Does the idea of watching the savings pile up get you excited? Try setting up a goal with your Mint account and making that progress bar move! 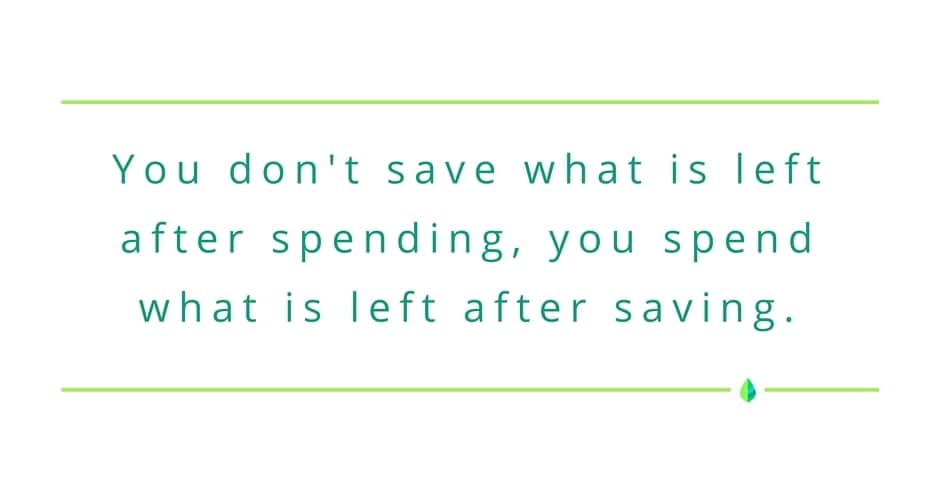 We would like to hear your story! Contact us at Editor_Mint@intuit.com with “Mint User Story” in the subject.

Kim Tracy Prince is a Los Angeles-based writer who is pretty jealous of Lawrence’s early progress. It took her many years to pay off her student loans. She celebrated by finally framing her diploma.